Farmers in Poland’s southeastern border province of Podkarpackie are angry that Ukrainian grain earmarked for export to the Middle East and Africa is creeping into the domestic market and lowering prices in Poland’s poorest region.

“Of the grain that is now getting out of Ukraine, about 80% is coming through Poland and much is leaking into the local markets, bringing down prices,” Jan Bieniasz, managing director of the SAN famers’ cooperative in the village of Laka, told DW.

Farmers are a key group for the ruling Law and Justice (PiS) party, whose poll ratings have started to fall. In the 2020 presidential election, PiS-backed incumbent Andrzej Duda took 91.4% of the vote in the province.

On May 12, the European Commission said it would help in the transport of grain from Ukraine by setting up “solidarity corridors” from the Poland-Ukraine border to Baltic Sea ports. US President Joe Biden promised Washington’s help to ensure silo storage.

In July, Russia and Ukraine signed a deal to free up Ukrainian grain exports that have been blocked since February. The proposal marks the first major agreement between the two warring sides and has boosted hopes that a worsening food security crisis can now be eased.

The breakthrough in transit of Ukrainian grain exports via the Black Sea ports should be good news for Polish farmers and PiS. The agreement will allow Ukraine to export 22 million tons of grain now in the ports of Odesa and Yuzhne and help lower world prices.

But what is good for the global consumers is not necessarily good for Polish farmers. As Ukraine’s need for Polish transit routes is likely to last well after the signing of the Istanbul agreement, many farmers are worried.

Bieniasz is skeptical about the Istanbul agreement and said the EU Commission “has opened up a can of worms” with shipments across Poland.

“Who will insure the grain being transported across the Black Sea when Russia is still attacking Odesa?” Bieniasz asked. He believes only 10-20% will make it and the rest will have to come overland, most through Poland.

“No-one thought through how this was to be managed and controlled. There is no system in place,” Bieniasz said. This is not the Polish government’s fault, he added. 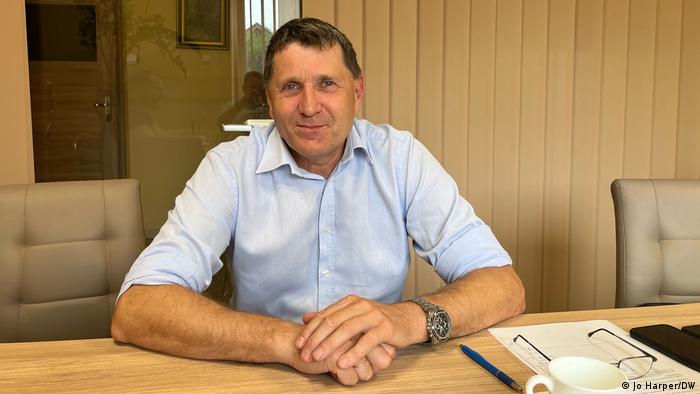 Jan Bieniasz said Russia, and the USSR before it, has always used food as a political tool and would continue to do so

At the border crossing in Korczowa, 10 km (6 miles) from the small town of Przemysl, Ukrainian drivers wait to get into Poland. One driver, Yakan, told DW he had been waiting 24 hours on the Ukrainian side and was transporting his grain to a nearby silo on the Polish side. “It’s a nightmare,” he said.

Too much Ukrainian grain?

According to the Polish People’s Party (PSL) — who has a strong voter base in rural Poland and among farmers — about one-third of Ukrainian grain leaks into Poland.

“At our border, huge amounts of grain are waiting in wagons and silos, ready for export. Of over 14,000 wagons, every fifth is a grain wagon,” the president of PSL, Wladyslaw Kosiniak-Kamysz, said last week.

Prime Minister Mateusz Morawiecki said at the beginning of July that the sale of Ukrainian grain in Poland would be blocked.

But former minister of agriculture Jan Krzysztof Ardanowski from PiS believes no-one really knows how much grain is coming across the border.

“We have no guarantee that the grain that was only supposed to pass through transit does not remain in Poland. At the border, only the amount of grain imported by Polish companies is analyzed, about 700,000 tons in the last two months,” he told DW.

Grain from Ukraine has been flowing into Poland “on an unprecedented scale,” claims farmers’ union AGROunia.

AGROunia, which has organized protests in recent weeks, said data provided by the Ministry of Agriculture show 640,000 tons of grain were imported  by Poland in the first half of 2022.

But Michal Kolodziejczak, head of AGROunia, has doubts about the official figures. “Farmers say it is much more.The president of the Lublin Chamber of Agriculture said that at one border crossing alone, in Hrebenne, there were 1,500 wagons, with 60 tons each, which gives 90,000 tons. Farmers alerted feed mills and mills overnight stopped buying grain from Polish farmers,” he told DW. 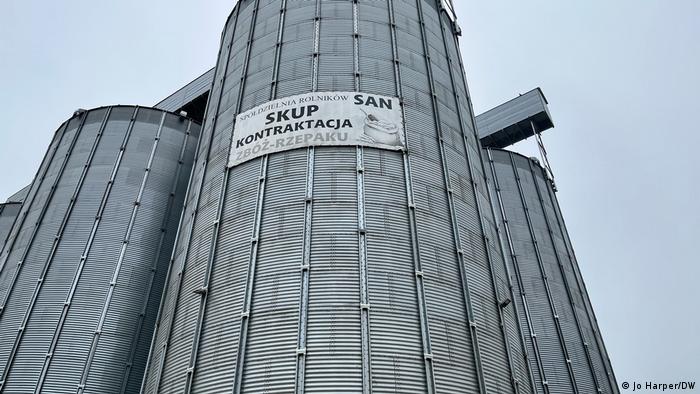 The SAN famers’ cooperative on the outskirts of Rzeszow has grain storage capacity of about 11,000 tons

Grain market experts, meanwhile, say there is no evidence of Ukrainian grain being sold on the Polish market, or if there is it’s not enough to create more than a market ripple. And some people claim these are rumours stoked as part of Russia’s hybrid war to drive a wedge between Poles and Ukrainians.

“Information chaos and the dissemination of false information about millions of tons of grain coming to Poland from beyond the Ukrainian border are a big problem,” Poland’s Minister of Agriculture Henryk Kowalczyk said recently. Kowalczyk has sought to reassure farmers, saying that higher imports of grain to Poland are accompanied by increased exports.

“640,000 tons from Ukraine is not much if we compare it with the fact that Poland produces 24 million tons per year,” he said.

Global prices up, local prices down

Farmer Jan Bieniasz argued though that every company can legally buy Ukrainian grain at the border and that it was 20% cheaper than Polish grain. The free market would mean that “no-one now wants to buy Polish grain in the Podkarpackie and Lubelskie provinces” anymore, Bieniasz added.

“This is creating a price war. The small amounts that do enter Poland are large enough to cause reductions here, but not big enough to affect the global situation. So, on the world market grain is expensive and Ukraine has very cheap grain, despite much lower production this year,” Bieniasz said.

The going price for Polish grain is about 1,200 zlotys ($253, €250) per ton and Ukrainian about 1,000 zlotys per ton, according to Bieniasz observations. And AGROunia’s Kolodziejczak added that imported grain on advertising portals can be purchased for 500-700 zlotys per ton plus costs of 250-270 zlotys per ton for transporting the  grain to the ports in northern Poland about 600 kilometers away.

“In March 2022, Polish farmers sold Polish wheat for 1,800 zlotys per ton. If they do not sell their arrears, they will not have the money to plant new crops. This will affect food prices next year,” Kolodziejczak said. 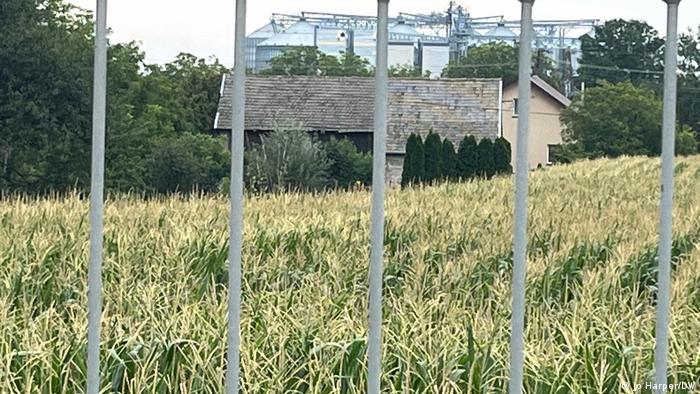 What can the EU do?

On June 30, Bieniasz and fellow farmers from the region met with Polish and Czech Republic agriculture ministers and called on the EU to buy Ukrainian grain at 90% of the EU average for export outside of the EU.

“This would stabilize prices in Ukraine and calm prices in Poland,” he said, arguing that the mere announcement of such a mechanism would have “a mitigating effect on the market.”

If the Commission wants this corridor and has put money up front, he said, it will want to see it is properly run. Time is running out, he urged, as the new harvest has started. But, so far, he hasn’t heard back from Brussels.

How Russian Soldiers Ran a ‘Cleansing’ Operation in Bucha