How can Sri Lanka recover from economic collapse? | Business | Economy and finance news from a German perspective | DW

Sri Lanka’s President Ranil Wickremesinghe, who was picked to continue in the role by parliament on Wednesday, now has a mammoth task in guiding the country out of its economic crisis. The Indian Ocean island’s debt-laden economy collapsed after it ran out of money to pay for food, fuel and medicine — sparking months of protests.

The government owes $51 billion (€50 billion) and is struggling to make interest payments on those loans, let alone pay down the principal.

Many analysts have blamed years of mismanagement and corruption for the meltdown, including reckless borrowing from China, which was used to fund infrastructure projects that turned into white elephants.

The debt crisis was exacerbated by several other policy blunders, including deep tax cuts introduced just months before COVID-19 hit and an abrupt transition to organic farming that saw crop yields plummet.

A massive drop in tourism revenue — a vital source of foreign exchange — following the 2019 Easter terrorist attacks and during the pandemic, made matters far worse.

The economy is on course to contract by as much as 8% this year, while the cost of many food products and fuel has tripled and currency has collapsed by 80%.

Can IMF bailout be secured?

The first priority for the new government will be to restructure Sri Lanka’s huge debts. Negotiations for a bailout from the International Monetary Fund (IMF) are already underway but they will require further restructuring of existing IMF loans as well as to others from China, India and Japan.

Any rescue package is likely to come with strings attached, including the privatization of state-owned enterprises and deeper austerity measures.

“The reality is that people can’t take any more austerity,” Ahilan Kadirgamar, a political economist at the University of Jaffna, told DW. “Many people have no cushion whatsoever,” he said, adding that nearly two-thirds of Sri Lankans work in the informal economy.

Kadirgamar is skeptical about an IMF bailout, saying that Colombo will struggle to boost its external debt going forward as the cost of capital will be too high for a country that has just defaulted.

The economist has called on Wickremesinghe to use Sri Lanka’s foreign exchange income — which he said amounted to $1.3-$1.5 billion per month — to prioritize the import of essentials like food, fuel and medicine that are still in short supply. The government must also increase deficit spending to fund further relief for the public, amid the rising threat of famine, he added.

The previous government of President Gotabaya Rajapaksa — who fled to Singapore and resigned from exile — has already undone some of the policy errors that fueled the crisis. But many of them could take years to help fuel the recovery. 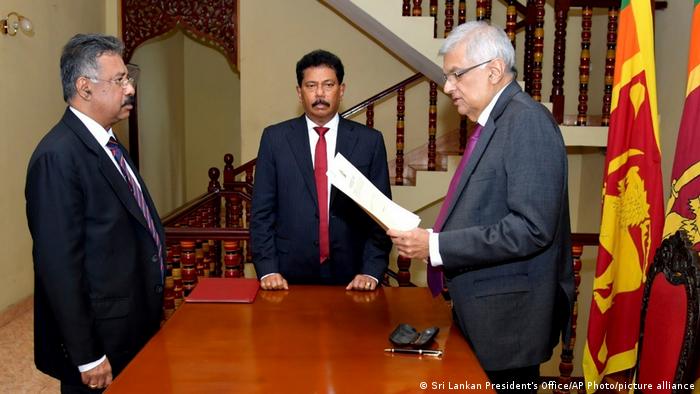 For example, sweeping tax cuts announced in 2019 to spur growth were reversed last month to help meet the conditions of the proposed IMF bailout.

The original decision saw revenues fall by as much as 800 billion rupees ($2.2 billion, €2.1 billion) a year, according to Bloomberg. The reversal means sales tax (VAT) and corporate taxes are being hiked at the worst possible time and may fail to boost tax revenues enough while the economy is on its knees.

“I would say that the benefits [of the tax hikes] are going to be negligible,” Soumya Bhowmick, associate fellow at the India-based Center for New Economic Diplomacy, Observer Research Foundation, told DW. “The additional tax revenue won’t go to strengthen the economy but to tackle food shortages and other measures.”

Kadirgamar, from the University of Jaffna, noted there was, “no appetite from the political class for a wealth tax,” despite the urgent need for new streams of tax revenue.

In November, the government also U-turned on a major experiment with organic farming, just months after announcing a nationwide ban on synthetic fertilizers and pesticides. As a result of the ban, domestic rice production fell by a third and tea production — the country’s primary export and source of foreign currency — dropped by 16%.

“In a short period of time, they destroyed the productivity gains achieved by farmers over many years, so rebuilding will take quite a lot of time, and that’s after they have dealt with the crisis at hand,” Bhowmick said.

Kadirgamar told DW that many of Sri Lanka’s 2 million farmers had “lost confidence” after the organic blunder and that an “active stimulus” would be required by the government to encourage them to recultivate their land.

“Even if agriculture is low in GDP terms, in terms of our food security and people’s livelihoods, it’s a really huge sector,” Kadirgamar told DW.

Tourism, too, could take a long time to recover. Sri Lanka’s tourist revenues reached $4.3 billion in 2018 but slumped almost 80% during the pandemic.

While most Asian countries have seen an increase in international travelers recently, the widespread civil unrest and the severe disruption in Sri Lanka have again put off many holidaymakers. 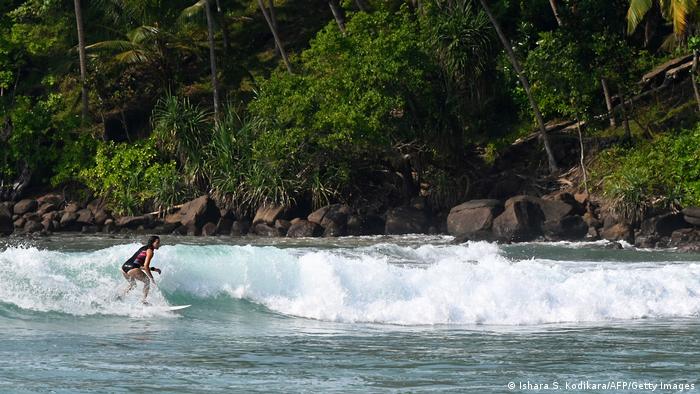 Rising foreign remittances from the estimated 3 million Sri Lankans working abroad could be a growing source of revenue but that too has been hit by both the pandemic and currency controls introduced last year.

Expatriates in total send home between $500-600 million per month, but when the government set the rupee’s exchange rate at an uncompetitive price, the use of the informal “hawala” transfer system increased while official remittances dropped by up to 52%.

“Hawala” allows migrant workers to remit cash in the currency they earn to a middleman who ensures the worker’s family receives the equivalent amount in rupees.

“Unless the government figures out a way to incentivize remittances through formal channels, the figure won’t return to its previous level,” Kadirgamar said.

Bhowmick, however, was more optimistic, as a result of an increase in Sri Lankans seeking employment abroad as their work at home has dried up.

“I’m quite hopeful that remittances will return to their normal level within a year or so as post-pandemic recoveries happen,” he told DW.

Zelenskyy: Intensity of hostilities is no less than at the beginning of autumn