An almost 30% decline in apple production has dealt a serious blow to the region’s biggest industry, leaving farming families with huge debts.

A sudden dip in temperature causes the fall of the buds and prevents the movement of bees necessary for pollination. While an abnormal rise in temperature triggers a high incidence of infectious diseases, resulting in the decline in productivity, growers say. 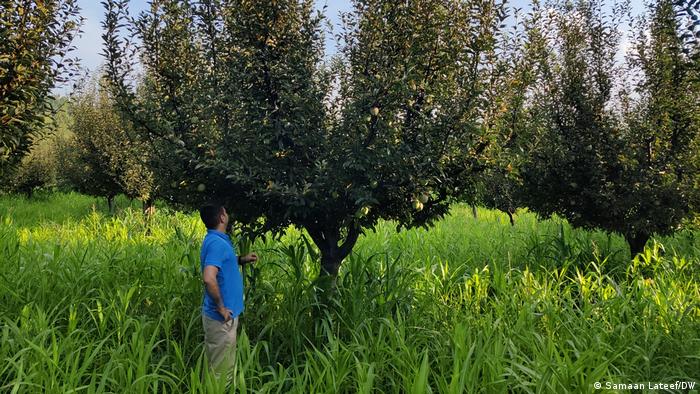 Sharp temperature fluctuations followed, resulting in the fall of the fruit buds and the spread of infectious diseases.

Farmers have complained that ongoing heat waves and humidity have caused dark smudges to appear on the surface of apples, described by experts as sooty blotch and flyspeck disease, adversely affecting the quality of the crop.

“The apple crop has become vulnerable to diseases due to changing weather patterns and the past four years have given us nightmares,” said Shameema Hassan, the wife of a well-known apple grower in north Kashmir’s Baramulla district.

“It will be either good crop but largely infected or vice-versa,” she added.

The consequential recurring losses have badly affected their livelihood, forcing them to move their daughter from a private school to a public one, where education is free but learning standards are abysmal, Hassan told DW.

The northern part of Indian-administered Kashmir is known as the region’s apple bowl as it produces the highest quantity of apples.

Over the decades, the apple orchards have grown through its -“karewas” — or elevated tableland — and major chunks of the paddy land were converted into apple orchards in order to generate higher profits.

Until 2018, Hassan’s family produced 3,000 boxes of apples annually, but the production has since plummeted to just 700.

“Normally, this year I should have produced 4,500 boxes of apples because new apple trees have grown to fruit giving age but the production is declining,” she said.

In 2016, her family had an annual turnover of 20 million rupees but the losses have landed them heavily in debt.

“We owe nearly Rs 10 million [€123,000] to banks and apple traders,” Hassan said. “We have started a copper shop to feed the family. We hate going to the apple orchards.”

According to data from the meteorological department, there has been a 70% to 80% deficiency of normal precipitation in Kashmir this year. 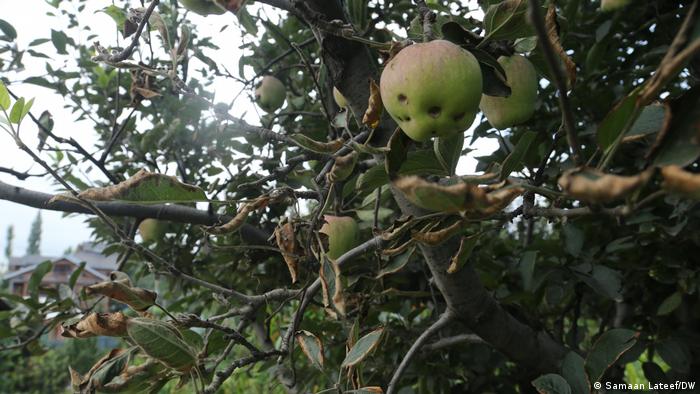 Shabeena Malik, a science teacher in Kashmir said the increased temperature has resulted in a widespread attack of aphids, causing irreversible damage to the apple trees.

“Despite multiple sprays of insecticides, these aphids have gone out of control,” said Malik, whose family owns nearly 40 acres of apple orchards.

The use of substandard pesticides is also a major cause of diseases which damage the apple and put an economical burden on growers, who are in debt in absence of insurance cover from the government, she said.

“The intensity of insects and pests has shown an increase this year due to early high temperature in spring,” said Ashiq Hussain, Fruit Scientist at Sher-e-Kashmir University of Agriculture Sciences and Technology, Srinagar.

“Once we cross 30-degree temperature, the entire apple orchards will wipe out because seeds will cease to grow,” she told DW.

Hussain said Kashmir would never have experienced hailstorms in June, but their intensity has increased, badly damaging the apple crop.

As the Kashmir apple is “facing a danger of becoming a rarity in India due to recurring production losses,” Malik said the farmers are gradually moving to alternative crops. 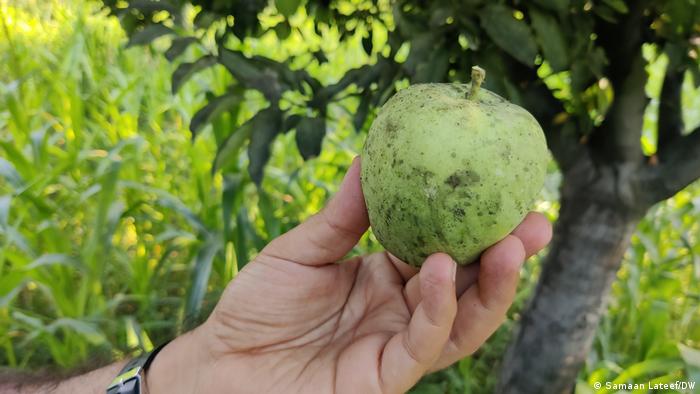 In hundreds of apple orchards across Kashmir, farmers have sown wheat, mustard, maize and legumes.

Instead of cutting down the trees, the farmers said they have brought back the wheat crop, a major attraction to rodents which damages the roots of the apple trees, to “facilitate their silent death.”

Ghulam Hassan Bhat, 57, an apple grower in north Kashmir’s Baramulla district, has an emotional attachment to his apple orchards which provided his main source of income for decades.

Bhat used to run an apple trade worth millions of rupees, but the recurring losses in the past four years have thrown him into debt — forcing him to shut the business and turn to wheat cultivation.

“Let the rodents silently destroy the apple trees, I have started with the cultivation of wheat. The apple trade is a no go zone for us now. It will take a lifetime to pay the debt to the banks and traders,” Bhat told DW.

The losses in the apple industry have forced thousands of people out of the sector as traders wind up their businesses.

Muhammad Shafi Var, who lives in Baramulla district’s Sheikhpora village, said he was earning nearly half a million rupees annually from his apple orchard — but now he earns just $100 (€98.00) a month working in a hotel in south Kashmir’s Pahalgam tourist resort.

Var said that if his apple orchards, which are located on elevated tableland, were to get adequate irrigation, he would cut down the trees and cultivate wheat and paddy.

“At least I can produce enough food to fill the stomach of my family. Even pesticides have become unaffordable for these orchards and when you know apple crop won’t earn you enough, we have stopped spraying them,” he said.