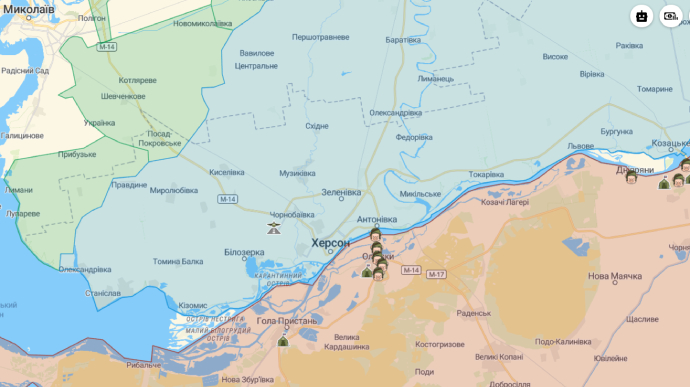 The Russian occupation troops are moving 15-20 kilometres inland from their constructed frontiers on the left bank of the Dnipro River in Kherson Oblast in order to avoid attacks by the Armed Forces of Ukraine. However, the south defence forces are taking the Russians’ logistics under their fire control.

Quote: “Hypothetically, they can threaten [Kherson – ed.], because the distance allows [them] to use various types of weapons. But we are also not standing still and using counter-battery fighting; we have things to respond to as well. Due to this, there is a certain activity by the enemy troops on the left bank of the Dnipro River regarding moving 15-20 kilometres deeper from the coastline.”

Details: Humeniuk has stated that the Armed Forces of Ukraine are taking the logistic ground routes of the Russians under their fire control; therefore, there will be no easy drawing down of reserves or supply of munitions for the occupiers.

According to Humeniuk, stabilisation measures are still being conducted on the right bank of the Dnipro River at the moment, which is more than 4,870 square kilometres.

Moravetskyi told how Putin miscalculated during the invasion — tsn.ua

The power of Mexican cartels: In Mexico and abroad