Now is the time to save the all-volunteer force. 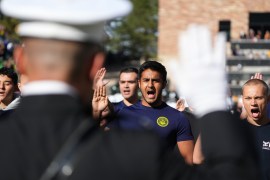 It has been nearly 50 years since the United States moved away from drafting members into military service. Since the Vietnam War ended, an all-volunteer force has kept America safe at home and abroad. During this period, volunteer numbers for military service have seen ups and downs, but recent reports indicate we may be near a historical low point for interest in military service.

Although some services report more significant challenges in recruiting than others, all need help to recruit enough members to sustain active duty and reserve numbers. The Army is the worst off, missing its fiscal year 2022 recruiting goal by 25%, and may need to cut its overall force size by 10,000 personnel in 2023 due to a lack of accessions. The Navy did better, falling short by only several hundred personnel. The Air Force and Marine Corps met 2022 numbers but only by dipping into pools of deferred candidates who would have typically entered service in 2023, putting both services at a deficit to start the new year. Compounding all of this is the fact that Reserve and National Guard forces, which augment the active-duty force, are also struggling to recruit.

The time to act is now, and there are two options. One is instituting nationally required service, like in other countries worldwide. Service could take several forms, from compulsory military service, akin to previous drafts, to compulsory civil service, with military service being one option. While national service of any form should be encouraged, two data points should lead us away from the required service option. Periods when the United States forced people into military service during previous conflicts, and the impacts on both the military forces and the public’s support of the military, should cause concern. To be clear, many Americans drafted into the military served honorably and rightfully deserved recognition from a grateful nation but never received it in some cases. However, sending military members compelled to serve into harm’s way is much different from sending people that are volunteering to serve.

Second, it would be unwise not to take notice of the recent challenges on the battlefield and domestically in Russia, as Russians are forced into military service in Ukraine. Although direct comparisons between the United States and Russia are challenging and each situation unique, people could expect comparable results with forced military service in any country. From a practical standpoint, compulsory military service is extremely likely to have significant pushback from the general population, become highly divisive, and is unlikely to be implemented nationally. Should the United States be involved in a major war, reinstating the draft may be necessary. Short of total war, the all-volunteer force, which has ensured safety and prosperity for the past 50 years, should be maintained at all costs.

We must revamp military accessions and recruiting based on practicality and necessary force effectiveness. With only 25% of the target population for military service able to meet accession standards, the services compete with each other and private industry for the same talent. There are two ways to address this issue: either change the requirements so more people are eligible or make more people able to meet the requirements. Pursue both in short order.

To be clear, do not lower the standards arbitrarily to increase accessions. However, the military services should more frequently review the standards. Examples of this include the Navy recently raising its age limit and the Air Force revisiting if a failed drug test is an ultimate disqualifier. In both cases, current dismissed candidates could become viable candidates with additional screening. Adjusting the standards in both directions should be an ongoing process.

The military has historically relied upon available eligible candidates and has not done much to make candidates eligible. This approach no longer works, and a key component to saving the all-volunteer force will be finding ways to make ineligible candidates who still want to volunteer become eligible. Body weight and aptitude are two areas where motivated candidates with help have now met the requirements through the Army’s Future Soldiers Preparatory Course, a pilot pre-boot camp course designed to address these issues. The services must consider these added costs for an all-volunteer force with volunteers in short supply.

Initial assessments of the Army initiative are positive, and expanding this program should be done nationally. The Department of Defense could run this program more efficiently than having every service run a separate program. Successful graduates would still proceed to service-specific accession points. For members facing body weight issues, implementing a program through a national fitness chain using in-person or virtual coaching might also reduce costs associated with housing and transportation.

A significant impact of the pandemic diminished access to potential recruits and the visibility of recruiters in the community. High schools and public gatherings closed or moved to virtual environments, making it harder for recruiters to attend school and community events. Rebuilding recruiting networks will require additional time, resources, personnel, and access to high schools, colleges, and public gatherings. The COVID-19 restrictions have eased, but all the services appear slow to send more recruiters to the field and open more recruiting offices. Recruiters need more locations than they currently have. If the nearest recruiting office is an hour away, it will impede recruiters from connecting with communities and building quality relationships. Overcoming this will require more people in the field and more field offices. One solution could be having Guard, Reserve, and active duty service branches in the same offices and establishing more recruiting centers driving down overall costs.

While GI Bill benefits are a tremendous incentive for military service, many private entities are now offering education assistance to their employees. GI Bill benefits do little for potential recruits who have already incurred student loans before joining the military. The Navy offers up to $65,000 in student loan repayments for new recruits. The other services could follow this approach. Enlistment bonuses are up to $50,000 in some cases, which may help get more volunteers interested in military service, but this cannot be the long-term solution to military recruiting challenges.

Military recruiters must find new ways to market the benefits of military service better. Historically, this involved recruiting videos and posters appealing to a sense of adventure and camaraderie. We should not completely abandon this approach. However, the benefits the military recruiters must emphasize are medical care, educational opportunities, and the blended retirement system’s post-service financial benefits, short of full military retirement. People care about these things, which have been historically underappreciated in our society and not marketed well.

In 2019, Congress granted the service secretaries the authority to award career credit to highly qualified civilians and enable lateral entry into service as a mid-grade officer. Each service will approach this authority differently by the nature of its differing missions. However, the lateral entry initiative illustrates the types of solutions and flexibility necessary to address the current recruiting challenges.

Last, the military services should, in parallel, look at ways to retain more members in the service, both active and reserve. These are members who have already volunteered and in whom the United States has invested significant resources to train and equip. Every member who remains in the service decreases the need for new recruits and defers the cost of training a recruit. The most vivid example of this “recruit and replace” model is the Marine Corps, which annually discharges roughly 75% of first-term enlistment Marines, driving a yearly recruiting goal of more than 30,000 personnel for a 172,000-person force.

Making continued service more attractive is difficult, as no single issue causes members to leave the military. While recent 2022 midyear housing allowance adjustments and 2023 pay raises are helpful, more than pay alone is needed to win the retention battle. The military must also continue efforts to improve housing, provide childcare, address sexual assault, and make educational benefits more accessible. Initiatives acknowledging evolving demographics and generational expectations through extended parental leave, offering career intermission options, and reduced frequency of military moves also deserve consideration. There is much that can be done to improve military service satisfaction by reducing time consuming administrative burdens, decreasing cumbersome procurement requirements, and facilitating easier access to family and medical care. Although hard to quantify, these issues go a long way in improving quality of life and giving members more reasons to join or stay in the military. Military and civilian leaders at all levels impact recruiting and retention and now is the time for bold action to save and sustain the all-volunteer force.

The views expressed herein are solely those of the authors and do not necessarily represent the views of the U.S. government or the Brookings Institution.