Scholz is a wartime chancellor, whether he likes it or not 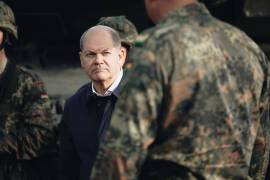 On Monday, Germany’s ill-starred defence minister Christine Lambrecht resigned amid ratcheting pressure on her country to give Kyiv Leopard battle tanks. Yet increasingly there is a sense that the real problem is a lack of leadership from the top floor of the Chancellery in Berlin.

Lambrecht’s portfolio was always the German cabinet’s most impossible job: since 1949, there have been nine chancellors, but her successor will be the 20th defence minister. During the cold war, the main job of a semi-sovereign West Germany was to defend the border with communist East Germany against a Warsaw Pact invasion with huge quantities of armoured infantry and tanks. The haunting spectre of the Third Reich — where the uniformed services were a “state within the state” — meant a civilian oversight architecture meticulously crafted to foil disruptive change of any kind.

Cue the fall of the Berlin wall in 1989, Germany’s reunification in 1990, the dissolution of the Warsaw Pact and the USSR in 1991 — and 30 years of dizzying whiplash for western defence ministers. But Germans uniquely misread the supposed “end of history” (in historian Francis Fukuyama’s phrase) and the enlargement of Nato and the EU as a validation of their postwar pacifism. Swaths of the Social Democratic party (SPD) and the Greens clamoured for a “peace dividend”: abolish the armed forces! Disband Nato!

Instead, al-Qaeda’s attacks on America on September 11 2001 forced Nato to regroup for the “global war on terror”; member states were told to radically downsize and professionalise their armed forces for worldwide expeditionary warfare. Russia’s illegal annexation of Crimea in 2014 made allies revert to the defence of Europe and pledge — at a Nato summit in Wales — to increase their defence budgets to 2 per cent of gross domestic product.

Most of Germany’s defence ministers were content to trot in the rearguard of these zigzags in the western security consensus. The few who battled to get ahead of events (most recently, Lambrecht’s predecessor Annegret Kramp-Karrenbauer) were thwarted by an entrenched and largely bipartisan array of forces of inertia: bureaucracy, generals, mayors, the defence industry, legislators, even their chancellor.

Three days after Russia’s invasion of Ukraine, German chancellor Olaf Scholz gave a powerful speech in which he pledged to stand by Kyiv. He announced a historic turning point (Zeitenwende) for German security policy and its armed forces, together with a special investment fund of €100bn. It could have destined Lambrecht for greatness. Instead, she may well come to be regarded as her country’s worst defence minister: seemingly indifferent to a string of blunders and graceless to the point of truculence.

But that failure does not rest with Lambrecht alone, but also with Scholz, who stubbornly refused to acknowledge the disaster zone at the defence ministry. Nor will the responsibility to pick up the pieces fall solely on her successor Boris Pistorius, Lower Saxony’s interior minister, who is well-regarded and close to Scholz but has no defence experience.

Scholz came to power promising transformational change for a Germany grown wealthy and complacent during a long peace. He must now do the same, faced with the worst security crisis Europe has seen since 1945.

Berlin has performed the feat of fully decoupling from Russian fossil fuel imports in less than a year. On defence, its record is far less impressive. Puma fighting vehicles promised to Nato turned out to be defective. Germany has given Kyiv powerful, effective weapons — but always belatedly and reluctantly; it is still holding out on the Leopard main battle tanks the Zelenskyy government wants.

Thirteen Nato member states operate Leopard battle tanks, which are German-made, giving Berlin a veto over their export. Poland and Finland have already announced that they want to send some of theirs to Ukraine. The UK is promising some of its own Challengers. US secretary of defence Lloyd Austin is expected in Berlin on Thursday ahead of a key meeting of Ukraine’s western military suppliers in Ramstein on Friday. A continued German refusal is hard to imagine.

The horrific images from Russia’s missile attack on a residential building in Dnipro and the slaughter of its soldiers in the trenches raise the stakes, and not just for Ukraine. Scholz did not set out to be a wartime chancellor. Now, that is the job by which history will judge him.