Singapore will decriminalize sex between men, Prime Minister Lee Hsien Loong announced on Sunday during a major policy address. The prime minister said that society in the city-state was becoming more accepting of gay people.

“I believe this is the right thing to do, and something that most Singaporeans will now accept,” Lee Hsien Loong said in the annual national day rally speech, noting that Section 377A of the penal code, a colonial-era law that criminalizes sex between men, would be repealed.

But the government has no intention of changing the city-state’s legal definition of marriage, which describes it as a union between a man and a woman, he added.

“Even as we repeal Section 377A, we will uphold and safeguard the institution of marriage… Under the law, only marriages between one man and one woman are recognized in Singapore,” Lee added.

In Singapore, under Section 377A, offenders can be jailed for up to two years under the law, but it is not currently actively enforced.

There have been no known convictions for sex between consenting adult men for decades, and the law does not cover sex between women or other genders.

Lesbian, gay, bisexual, transgender, and queer (LGBTQ) groups have brought multiple legal challenges attempting to strike down the law, but none has succeeded.

Singapore is the latest Asian country to move closer to ending discrimination against members of the LGBTQ community.

PM Lee also addressed the matter of his succession, saying it was “settled” with his deputy Lawrence Wong set to become the country’s coming prime minister.

Though the plan was slowed down due to the Covid-19 pandemic, Lee stressed things were now back on track. He added that the younger ministers had chosen the 49-year-old Wong to succeed him, calling on Singaporeans to stand behind him.

“Good leadership is non-negotiable,” Lee said during his Sunday address, pointing at less politically stable countries which swing from one government to the next. “A small country like Singapore has zero margin for error.” 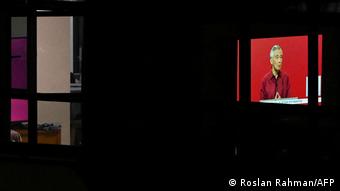 The sitting prime minister however stopped short of offering a clear timeline for the succession.

Wong, who also serves as Finance Minister in Lee’s cabinet, was appointed as deputy in June. It remains unclear whether he will take up the Prime Minister post before or after the 2025 election.

In his speech, Lee Hsien Loong also said that tensions between the United States and China and the Russia-Ukraine war affect security in the Asia-Pacific.

“We can expect more geopolitical contestation in the Asia-Pacific,” he said, adding that Singapore would try its best to avoid being caught up in the “major power rivalry” .

Worsening U.S.-China relations are making it “almost impossible” to work together on pressing global issues like climate change, pandemics, and nuclear proliferation, he said.

16 Dead After Minibus Collides With Two Lorries in Russia

From the new Smart Investor: Hot Autumn: This is how fund professionals prepare for the crisis