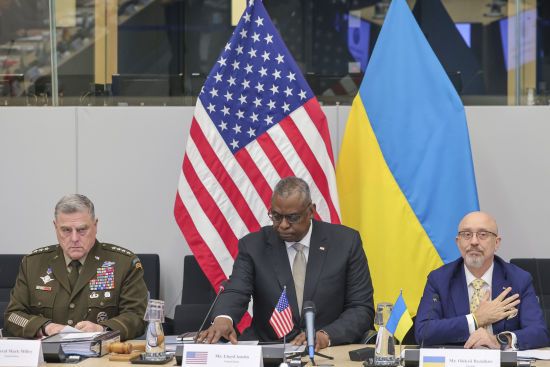 The main topics of the meeting were the protection of the sky and preparation for winter.

Allies of Ukraine held the seventh summit in the “Ramstein” format, dedicated to military aid to Kyiv. The online meeting took place against the background of a massive missile attack on Ukraine and missiles falling in Poland. “Rammstein-7” was opened by the US Secretary of Defense Lloyd Austin. The Minister of Defense of Ukraine was present on the Ukrainian side Oleksiy Reznikov and Deputy Commander-in-Chief of the Armed Forces Evgeny Moysiuk. The main topic was expected to be the strengthening of Ukraine’s anti-aircraft defense.

TSN.ua has gathered details on what additional help Ukraine can count on from its allies.

The main priority is the protection of the sky

Minister of Defense Oleksiy Reznikov said that the main topic at the Ramstein-7 meeting was the creation of an echeloned air defense system.

“Protection of the Ukrainian sky is our priority #1 and topic #1 at Ramstein-7. Together with our partners, we are working on creating an integrated and echeloned air defense system. We are preparing for winter on the battlefield,” the minister noted.

According to the results of the summit, Reznikov noted that the entire free world will continue to help Ukraine until it wins.

What will Ukraine get from Canada, Sweden, Spain and others

The head of the Pentagon Lloyd Austin according to the results of “Ramstein-7”, Ukraine will receive military aid packages from Sweden and Canada, additional HAWK air defense systems from Spain, ammunition from Poland, Germany and Greece.

According to Austin, Sweden announced a $287 million aid package, which will include air defense equipment. At the same time, the Swedish government will provide a separate winter aid package to Ukraine worth 60 million dollars.

Spain will provide Ukraine with two additional HAWK air defense systems and missiles for them. In addition, the Armed Forces will receive a battery of 105 mm howitzers and 77,000 sets of winter uniforms.

Canada announced the allocation of an additional 376 million dollars for military aid to Ukraine. The money will be used for military and telecommunications equipment, surveillance equipment, fuel and medical equipment. Canada will also continue its training mission for the Ukrainian military as part of Operation UNIFIER, currently operating in Britain, until the end of 2023.

Greece announced the transfer of 155 mm shells. Poland intends to transfer to Ukraine ammunition for artillery and tanks, as well as short-range air defense systems.

The Armed Forces can gain an important advantage over the occupiers

Military expert Oleksandr Kovalenko on the air of the Freedom channel, he said that, in addition to air defense, the topic of preparation of the Ukrainian army for winter is important today. In this component, the Armed Forces can gain an important advantage over the occupiers.

“There are two main topics. This is increasing the effectiveness of air defense. Anti-aircraft missile complexes will be provided, the names have not yet been announced. This is a very important step… The second a very important point is the topic of conducting hostilities in the winter period. A lot of attention was paid to it. Corresponding assistance from NATO countries, our international partners, will also be provided in the near future and is already being provided to provide the armed forces of Ukraine with the most comfortable entry into the winter period,” Kovalenko noted.

As the expert noted, in the winter period, the one who is better prepared for winter wins the battles, and the Armed Forces “thanks to such actions will be much better prepared than the Russian occupiers“.

Russians Fleeing to Belarus to Avoid Draft — But Will It Help?