US: Flooding in Kentucky leaves at least 8 dead | News | DW

At least eight people have died and “a number of people” are unaccounted for after floods swamped the Appalachian region of eastern Kentucky on Thursday.

Torrential rains caused water to gush out of streams and inundate homes in one of the poorest regions of the United States. In some areas, floodwaters washed out roads and bridges, and knocked buildings off their foundations.

“In a word, this event is devastating,” Kentucky Governor Andy Beshear said as he announced the first deaths.

“And I do believe it will end up being one of the most significant, deadly floods that we have had in Kentucky in at least a very long time.”

Beshear said 23,000 households are without power, and “a number of people” were unaccounted for. He expects more lives to be lost due to the catastrophe. 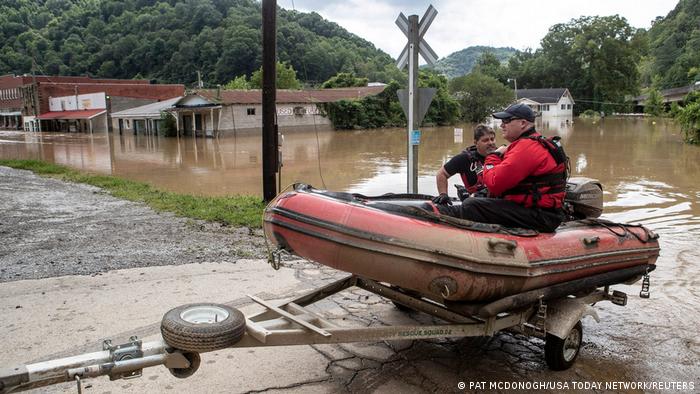 Rescue teams have been deployed in affected areas

The government of Kentucky has deployed the National Guard and state police to rescue people with helicopters and boats.

Evacuation centers have been opened in state parks and other facilities, however the governor warned that some of these facilities themselves had been hard-hit by the storms, and may be without electricity or other amenities.

State authorities are also bringing in drinking water on trucks.

The National Weather Service said there was an 80% chance the heavy rains would continue on Friday.