Moscow is looking for ways to circumvent US and EU sanctions, perhaps learning from Iran’s expertise in sanctions-busting, observers note.

“Since both Russia and Iran are under Western sanctions, both have a strong interest in cooperating to thwart them,” Mark Katz, a professor at George Mason University, told DW.

But how much Iran could help is moot.

In June, Russian officials visited Iran to review the country’s drones, according to US intelligence. Russia also seems to be using the prospect of grain deliveries to Iran in exchange for Tehran’s help in circumventing sanctions.

On the Iranian side, also cut off from the global banking system by Western sanctions, Tehran may be hoping that with Russia’s support it can pressure Washington to revive the 2015 nuclear deal dumped by ex-US President Donald Trump. 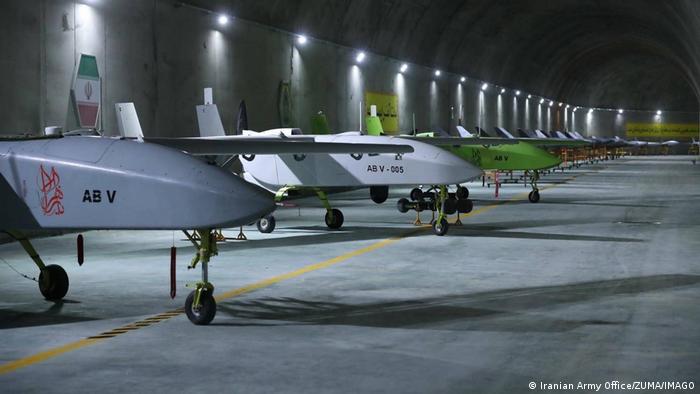 In the short term, observers say the impact of oil prices is more important for Russia than sanctions. Last year, Russia earned $119 billion (€117 billion) from oil and gas sales, when the price averaged $69 a barrel. This month, prices have been at $115 a barrel. Oil income makes up 40% of Russia’s budget revenues.

“We know from research that even under the best of circumstances, economic sanctions have a success rate of 10 to 30%. It was naive, wishful thinking that a large country like Russia would simply buckle under their burden,” Nicholas Mulder, a historian at Cornell University, told German news magazine Der Spiegel in a recent interview.

“First we need to define what we want to achieve with the sanctions,” Mulder said. Is regime change a possibility? “The West has tried that in Iran, in Venezuela, in North Korea, and it never worked,” he noted.

In 2019, Western experts believed that Iran’s 40-year-old revolution could be undone by a 50% fuel price increase. The country’s security forces responded ruthlessly to protests that followed and the regime is still in place.

Hanna Notta, from the Vienna Center for Disarmament and Non‑Proliferation, also told DW that at the moment and in the near future “sanctions have reinforced, to some extent, consolidation among segments of Russian society behind the Kremlin.”

Some experts believe that current sanctions against Russia aren’t working as a deterrent because the West failed to use them in advance of Putin’s invasion. “In fact, the West completely ignored all of Putin’s major crimes before,” said Bill Browder, CEO and co-founder of Hermitage Capital Management.

“The one big loophole is the $1 billion a day of revenue Russia receives from the sale of oil and gas. Until that is shut down, we haven’t achieved our objective of starving him of money to fight this war,” the British political activist and Kremlin critic told DW.

Robert Person, an associate professor of international relations at the West Point US Military Academy, argued that some experts say sanctions have failed because the threat of sanctions failed to deter Putin back in February. “But I think there are many signs that sanctions are having such an effect, but it will still be a long time before we may see a policy change in Moscow. This is why strategic patience is key,” he told DW, talking in a personal capacity.

John Smith, a former director of the US Treasury’s Office of Foreign Assets Control (OFAC), shared Person’s view, telling DW that sanctions are giving Putin fewer resources to fund his war machine. “The sanctions against Russia are undoubtedly working in terms of imposing significant and unprecedented costs on the government of Russia and the Russian economy.”

Not much to offer each other

Iran and Russia are competitors in hydrocarbon exports. Russia’s recent sale of oil and steel at discounted prices to China has hurt Iran, which has had to cut prices to remain competitive.

Hanna Notta said Russia and Iran don’t have many goods and services to provide each other, adding that both trade far more with China where they are “competitors in selling sanctioned oil.”

Smith believes the two countries could seek to “prop each other up” by strengthening economic and military ties, “but as they are increasingly becoming global pariahs, they also risk being dragged down by the other’s decreased popularity on the global stage.”

“Any collaboration between the two countries just shows how desperate the Russians have become,” argued Browder, and that there is “not much the Iranians can teach the Russians that the Russians don’t already know.”

Person said “beyond swapping tips and tricks” on how sanctions can be evaded” he doesn’t believe “there’s much real risk of Russia and Iran teaming up on meaningful sanctions-busting.”

“Non-sanctioned banks in a country like China are in a better position to serve as intermediaries between Russian banks and the global economy,” he added.

Observers note that sanctioning both Russia and Iran at the same time might not be the best way forward.

Katz from George Mason University said a more logical approach would be for Western governments to prioritize between Russia and Iran. “If Russia is currently a much greater threat to Western interests, then what Western governments could do is offer to drop sanctions against Iran.”

At a time when the US wants Europe to stop buying Russian oil, but additional supplies from America’s allies in the Arab world are not available, “then buying Iranian oil instead of Russian oil makes sense for Europe,” Katz concluded.